An Elite Hanoverian mare with a superb worth ethic by the German sire Goldfasan (Wendekreis) she is double bred Gotthard for those who know jumper breeding. Imported from Germany as a three year old, she carries Bolero lines in her pedigree as does the Olympic Champion mare, Brentina. Upon entry into the US, Silverhorne continued with her preparation for her AHS inspection and Mare Performance Test where judges scored her with 8s on head, neck, typiness and feminity and on jumping technique; 7s on walk and canter. Her disposition is a ten and she makes lovely, well minded babies with Sir Caletto.

EM Golden Gate is a super athletic mare who showed in the 4’ jumpers as well as the open hunters. Later in her career, after giving birth to two foals, she qualified for the CDS finals at Rancho Murieta.

As a 5 year old, she captured the title of Ultimate Sporthorse Champion in the 1998 Westcoast Sporthorse Classic. Golden Gate was the star of the two-day event which was at the time, the largest breed show on the West Coast, with 300 entrys that year. The all around Ultimate Sporthorse Award is given to the horse attaining the highest score in hand (76.7%), in a materials class (78.7% under saddle) and in a dressage test (65.45%). Golden Gate’s star continues to rise as she extends herself with each new foal, her 2003 filly, EMC Samantha, selling for $25,000 as two year old into a Southern California hunter show barn. 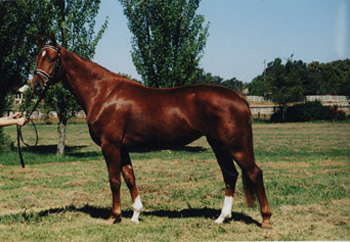 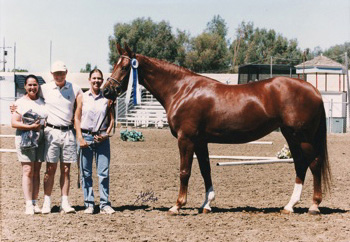 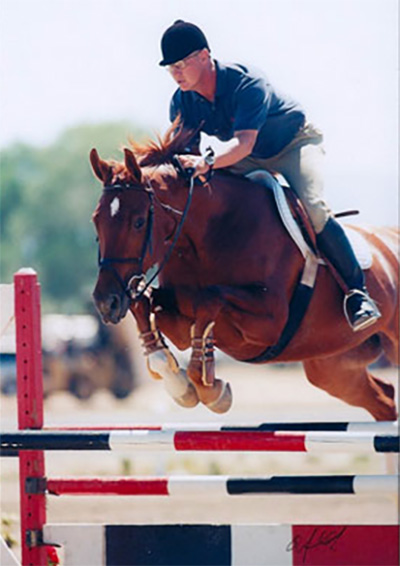 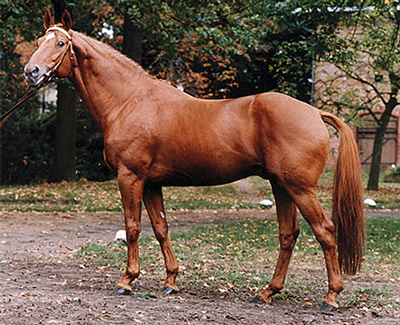 BOLERO
Bolero, found on the dam’s side of Golden Gate’s pedigree, is a classic foundation stallion in the Hanoverian Verband, one of the few sires to produce a new foundation stallion, Brentano II, along with other top stallions, Bismarck and Brentano I. Also, three of Bolero’s descendants medaled at the 2004 Olympics in Athens–Beauvalais ridden by Spain’s Beatriz Ferrer-Salat, Bonaparte ridden by Germany’s Heike Kemmer and BRENTINA ridden by American Debbie McDonald.

Bolero’s dramatic influence is made all the more remarkable by the fact that he died of a heart attack at the age of 12, when German breeders were just beginning to appreciate the potential he had as a sire. Bolero passed on his noble attitude and rhythmic gaits, producing outstanding, elegant dressage horses who have proven particularly successful when bred to Hanoverian G- and D-line mares.Bolero was by Black Sky xx, a Thoroughbred who produced very rideable dressage horses. Bolero’s success contradicted the popular belief of breeders at that time, which held that breeding a mare by a Thoroughbred with a Thoroughbred stallion would not produce successful offspring.

But, in fact, Thoroughbred influences contributed to the breeding of dressage horses from that point onward and proved to be one of the main factors in producing more elegant, lighter dressage horses. Bolero’s dam was Baronesse, a Hanoverian mare out of the mare Atlastaube (by Athos and out of Fliegerheil) who produced the popular sires Grenadier, Hitchcock and Winner. 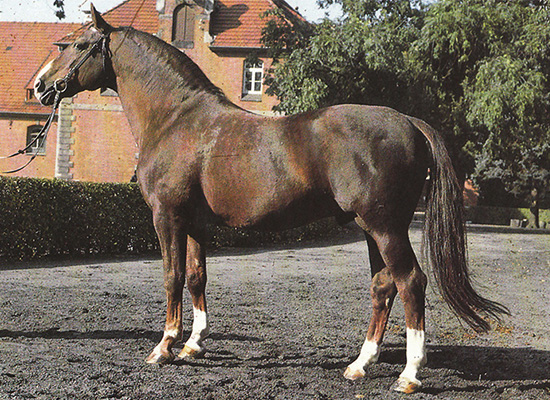 The Hanoverian approvals commission must have followed a higher inspiration when it approved a small, strapping chestnut for a career as a stallion without having an inkling that he would once be the most important stallion of the Hanoverian breed. The stocky, rather short Graf son did justice to the trust that was placed in him.

His covering period in Achim near Bremen produced three of his most significant stallion sons: Graphit, Gralsritter and Glander. The vigorous Graphit went on to become a first class sire and produced the esteemed private stallions Gloster, Grannus, Grundstein I and Grundstein II, as well as the Warendorf state stallion General I as his most important sons.

Conversely, the solidly built and not quite true to type Gralsritter had a shadow existence and only attained world fame in old age through his outstanding show jumping progeny via the approved Grandeur with Thomas Frühmann; threefold winner of the German Show jumping Derby. The powerful Glander was stallion performance test winner and enjoyed good breeding opportunities without necessarily fulfilling all hopes. He was also popular as he was the sibling of the Olympic horse Grande Giso with Johan Heins and enriched the breed with the maker of show jumper Gletscher.

Grande’s Achim period also resulted in the stallion Goldfalk, who attained high honors in Belgium and the international show jumper mares Graciosa with Peter Sünkel and Gute Sitte 2 with Eric Wauters, as well as the bay gelding Grande with Paul Schockemöhle.

In 1967 Grande was restationed at Landesbrück, then like now, one of the leading stations in the region surrounding the Celle state studfarm. He was successful here from the outset. His first crop at this station (1968) produced the powerful chestnut starter. Grunewald, who similar to Graphit was for a long time a brilliant show trotter at the Celle stallion parades. Grunewald sired both dressage horses as well as show jumpers for the very highest demands, just like his sire Grande and his half-brother Graphit, whereby the Olympic horse Grunox with Monica Theodorescu was his best-known progeny in competition sport. 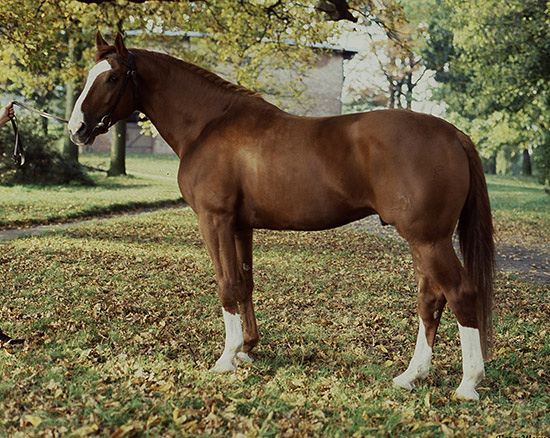 The Grunewald sons Grenadier and Grandseigneur, both bred out of half-bred mares were or respectively, are sought after sires. Grenadier, who has an all round disposition and is brilliantly true to type could have had considerably more influence in breeding. He was on the one hand however, lazy in covering terms and on the other not particularly fertile, criteria which he unfortunately also passed on to his sons and daughters. The approved Grenadier son Golfstrom I, with Ann Kathrin Kroth, the 1990 world championship gold medal winner with the German team, fertilized poorly and therefore became irrelevant to breeding quite early.

A very important Grande son from the Landesbrück period was the chestnut Garibaldi II, who advanced to become a top sire, but unfortunately died at the age of 14. Grande produced a whole seies of top quality competition horses during his Landesbrück period, including Grandson and Galapagos / both with G. Grillo, Gratulant 2 / Gerd Wiltfang, Santa Gruz / W. Bettinger and many more. Currently the most successful dressage horse world-wide, Gigolo. FRH / Isabel Werth is a Grande grandson via the underrated Graditz.

Grande was the first and to date the only stallion whom the stud administration of Lower Saxony put out to grass on the basis of his great deserts. He spent two years enjoying his new found casual lifestyle before he died aged 31 in 1989. 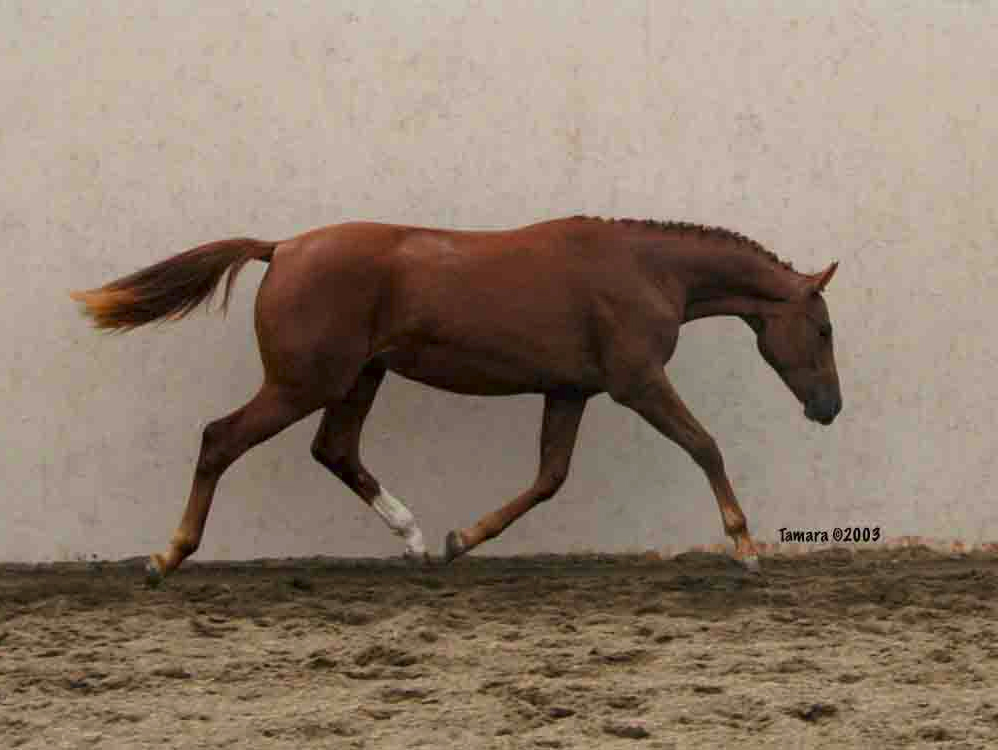 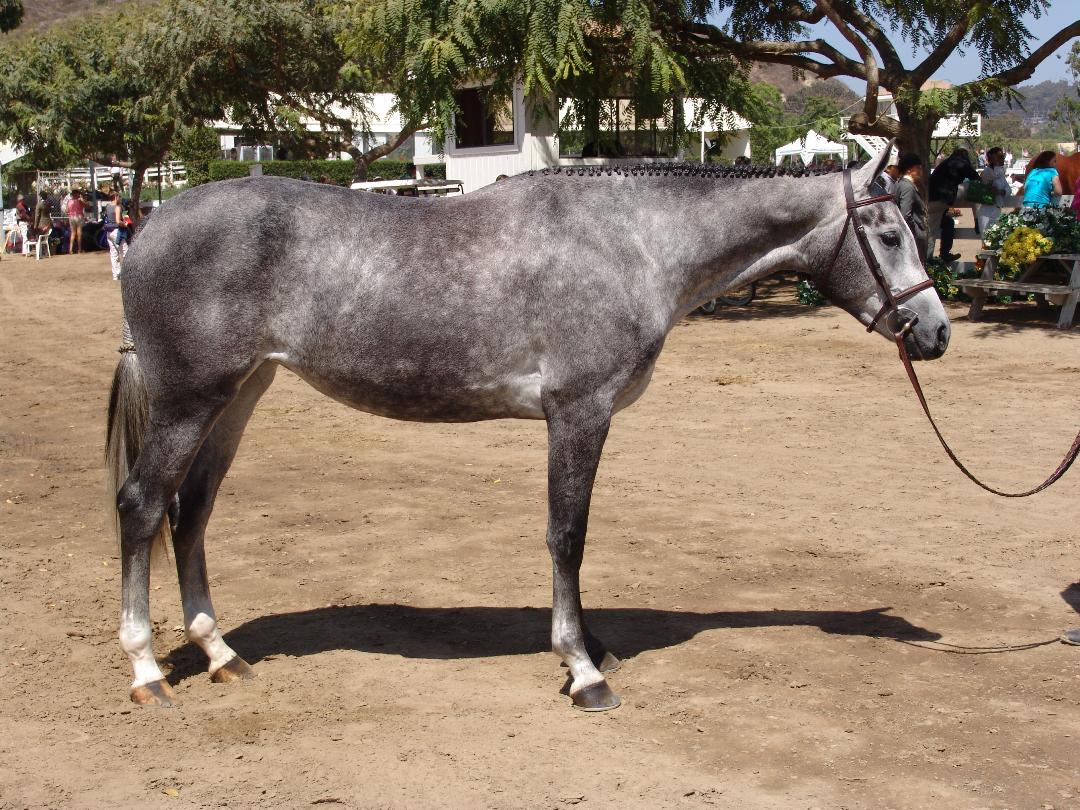 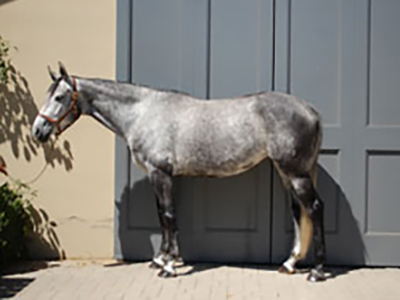